Carrum Primary School launched the first Big Green Schools Conference in March 2012 with 130 students and teachers from twenty schools in the City of Kingston. 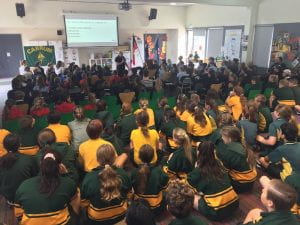 Our Second Conference was held on Friday, 10 May 2013, in conjunction with the 2013 Kingston Harvest Festival. Over 130 students and teachers:
+ Listened To & Question Environmental Gurus
+ Showcased Sustainable Action in Schools
+ Developed Big Green Ideas & Judged the Big Green Short Film Competition

In 2014, Carrum Primary School linked with St.Louis De Montfort PS to host the Conference. On 9 May and 10 September, schools in the City of Kingston gathered to explore and develop a community project titled “Carrum to Moorabbin”. The “Carrum to Moorabbin” project focussed on how students, as community members, can be proactive in making public transport more sustainable.

In 2015, the Big Green Schools Conference was held 8 May and 9 September, and focussed on ResourceSmart 5 Star Sustainability and the Ideas & Strategies schools can use to achieve 5 Star Certification.

In 2016, our amazing year 5/6 representatives won the inaugural Golden Chook Trophy for presenting the best school based environmental project at the Big Green Schools Conference on 7 September. The students showcased our fantastic soft plastics recycling project and the positive impact this will have on our environment.

In 2017 & 2018 we were very honoured to host 21 schools from across Melbourne to discuss environmental issues and hear about some of the programs other schools are implementing in relation to environmental science.